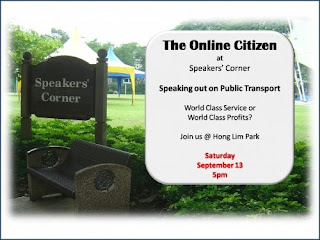 I will be speaking at Speakers’ Corner this Saturday. Please come down to support! :)

The Public Transport Council (PTC) is expected to disclose its decision on whether to approve revisions for public transport fares by September 30. To engage the public in discussion about the expected fare hikes, The Online Citizen (TOC) will be holding an event at Speakers’ Corner in Hong Lim Park this Saturday, September 13, at 5pm.

At Speakers’ Corner, presenters will discuss various aspects of public transport, including a proposal written by TOC’s writers with suggestions on improving Singapore’s public transport system. Copies of the TOC proposal will be made available to members of the public at the event.

Andrew Loh, TOC’s deputy editor said: “We feel that ordinary Singaporeans must speak up on this issue of public transport as it affects hundreds of thousands of Singaporeans daily. This is even more crucial when deliberations on the issue by the authorities are not open to the public.”

Members of the media are invited to cover the event.

* * * * *
In tandem with the Speakers’ Corner event, TOC is currently hosting a “Public Transport Week” on its website, theonlinecitizen.com, from 8 to 14 September.

During the week, TOC has highlighted the issues which ordinary Singaporeans are concerned about – such as the service standards of the transport companies, the profits made by them and suggestions on how to improve the commuting experience.

All these with one intention in mind: To make Singapore’s public transport system world class, which is the declared aim of the Singapore Government.

In this respect, TOC writers spent the past two months coming up with its set of recommendations for the authorities. The proposal paper will be sent to the Minister for Transport, the PTC and the public transport companies and will be made available on TOC’s website.

2 thoughts on “The Online Citizen to hold Speakers’ Corner event”